A facelift is a surgical operation to tighten up and lift the face. Likewise a neck lift is an operation to quite simply lift and tighten up the skin in the neck. The process of aging involves the loss of skin tone and elasticity. This occurs naturally over time as well being influenced by factors such as exposure to ultraviolet radiation from the sun. With the effects of gravity, the facial and neck skin starts to droop. There is also loss and descent of facial fat, particularly in the cheeks. A facelift and/or neck lift looks to correct these changes. It can also be combined with other procedures such as a blepharoplasty and fat injections to achieve a more balanced and complete improvement to the face and neck.

Facelift techniques that are available include a full facelift, a short scar facelift, 1 or 2 stitch facelifts and thread lifts. The choice of facelift technique is dependent on the degree of correction required as well as the degree of downtime and recovery period that is acceptable. Other factors which help to determine choice of facelift include if the neck is an area of concern and degree of scarring that is acceptable. This will be discussed with you at your consultation.

TIGHTEN
UP
YOUR
FACE

This procedure involves an incision which begins in the hair above the ear and extends in front of the ear, around the ear lobe and finally ending in the hairline behind the ear. The skin and soft tissue is then lifted away from the muscle layer on the face to expose the underlying SMAS layer. This layer is a strong structure overlying the facial muscles in the face and neck. During the operation, this layer is lifted and tightened with sutures, thereby providing the desired lift. In a full facelift, this lift is effective in the cheeks, jawline and neck. Once the appropriate lift has been achieved, the excess skin in the face and neck is carefully removed and the skin is sutured back in place.

This procedure is similar to a full facelift but the incision is limited to being in front of the ear. The skin and soft tissue is lifted away from the muscle layer to expose the SMAS, similar to a full facelift, and this is tightened with sutures. As access is limited, this procedure is suitable for lifting and improving the cheeks and jawline but is less effective for tightening the neck. 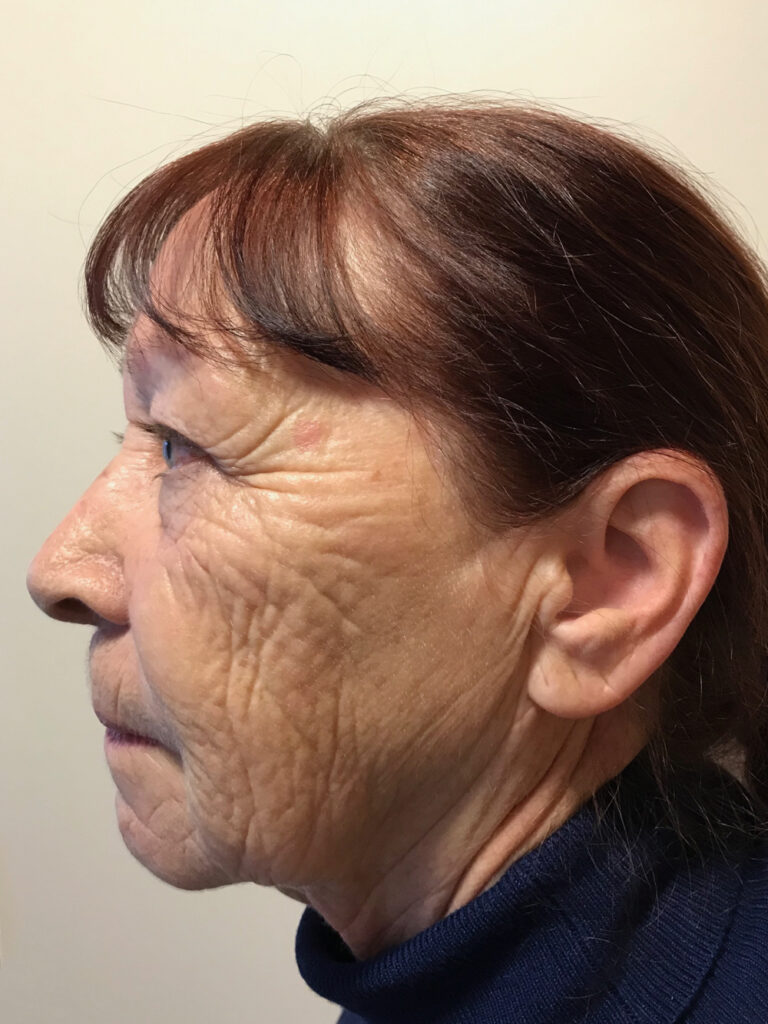 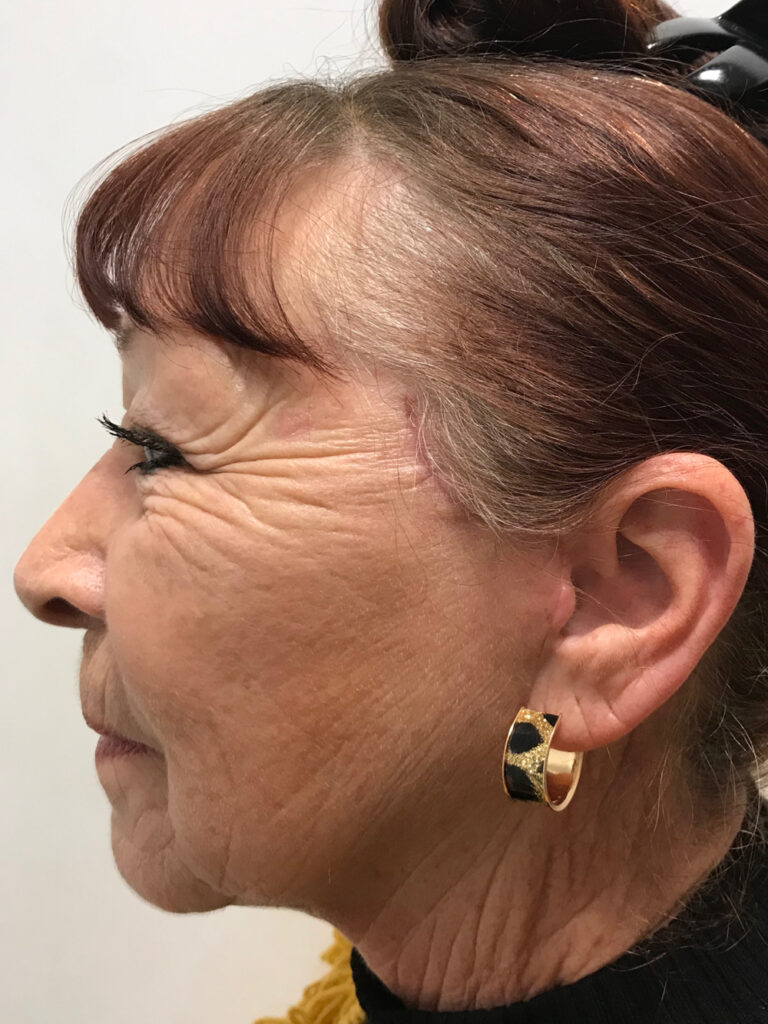 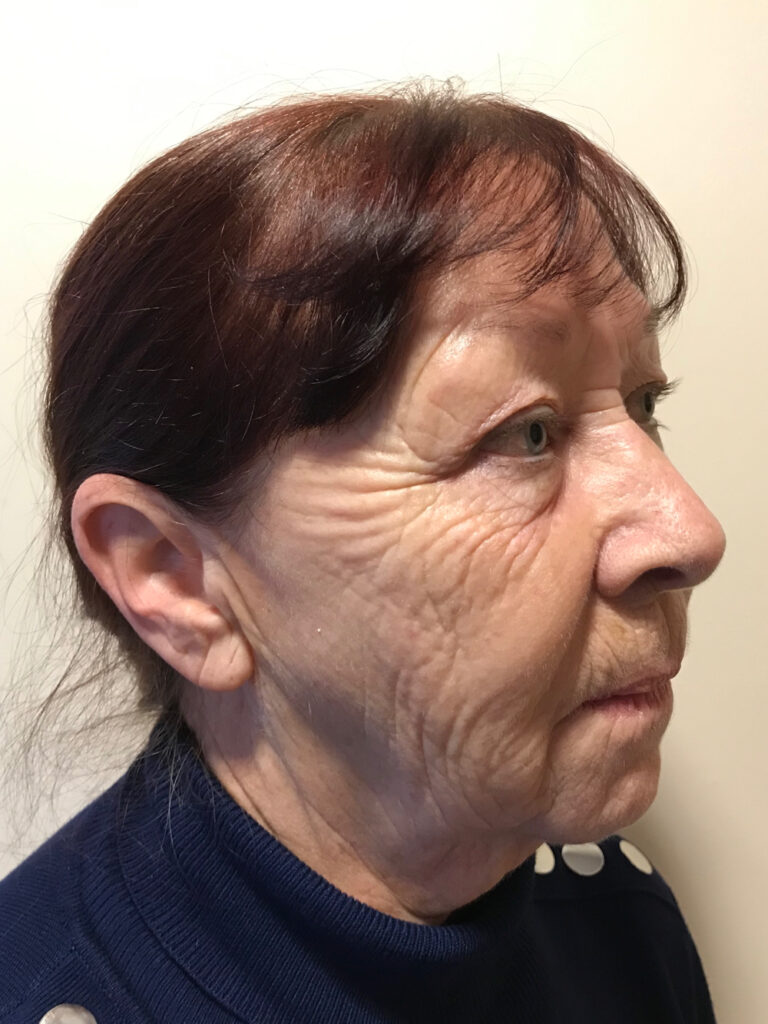 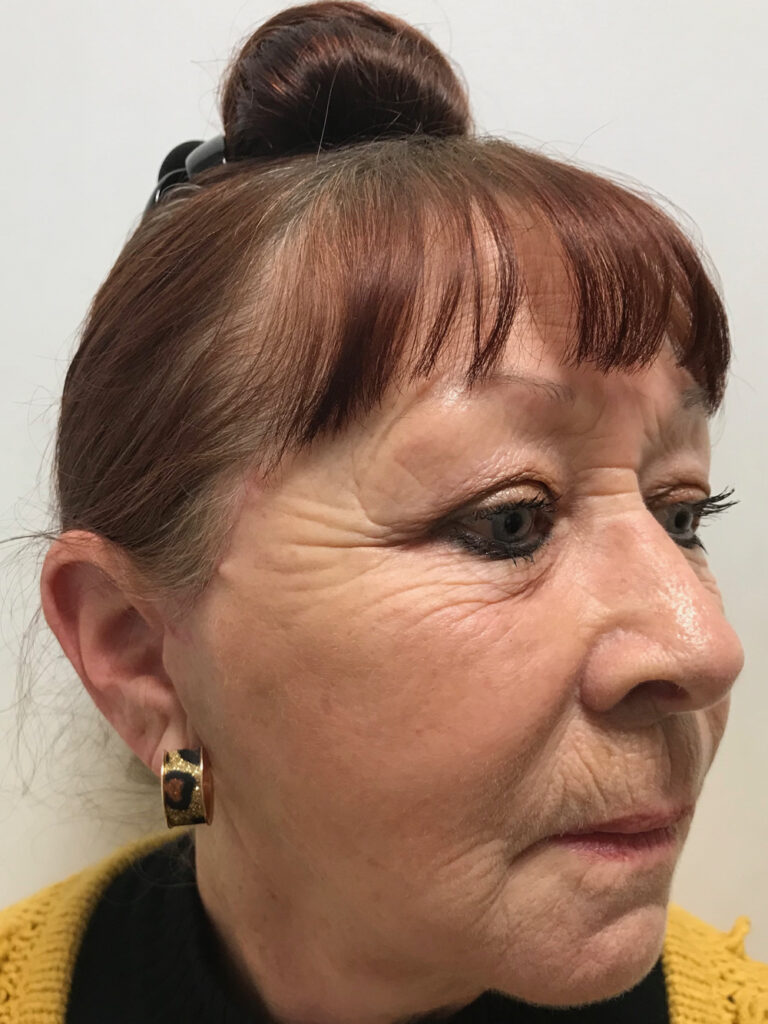 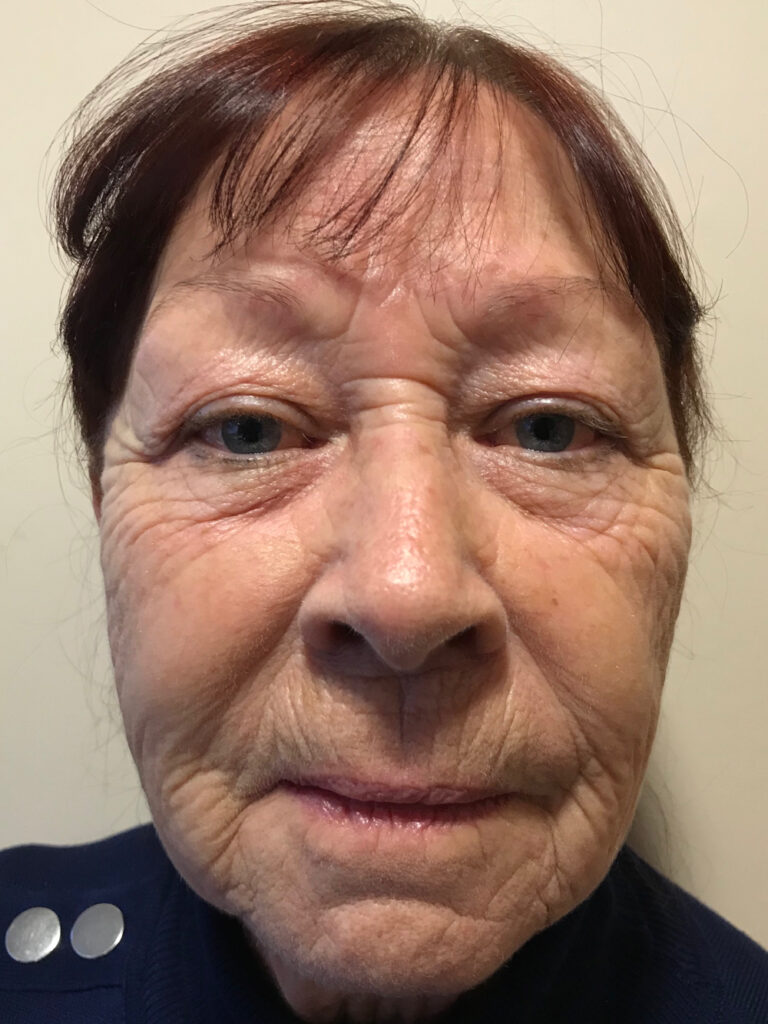 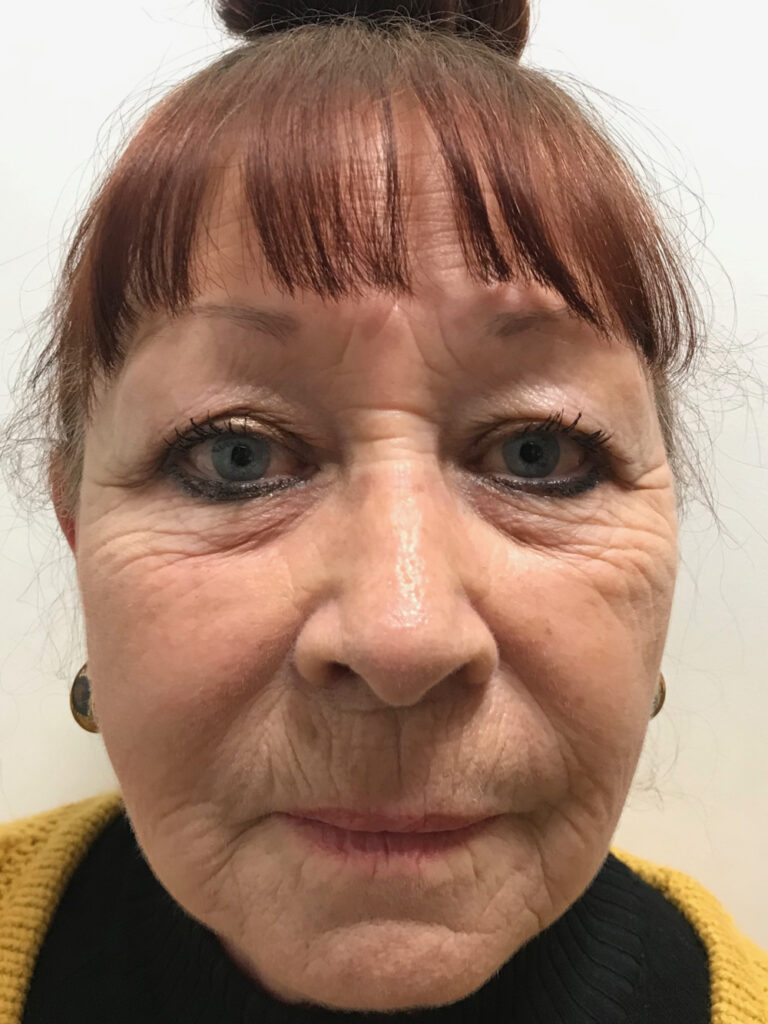 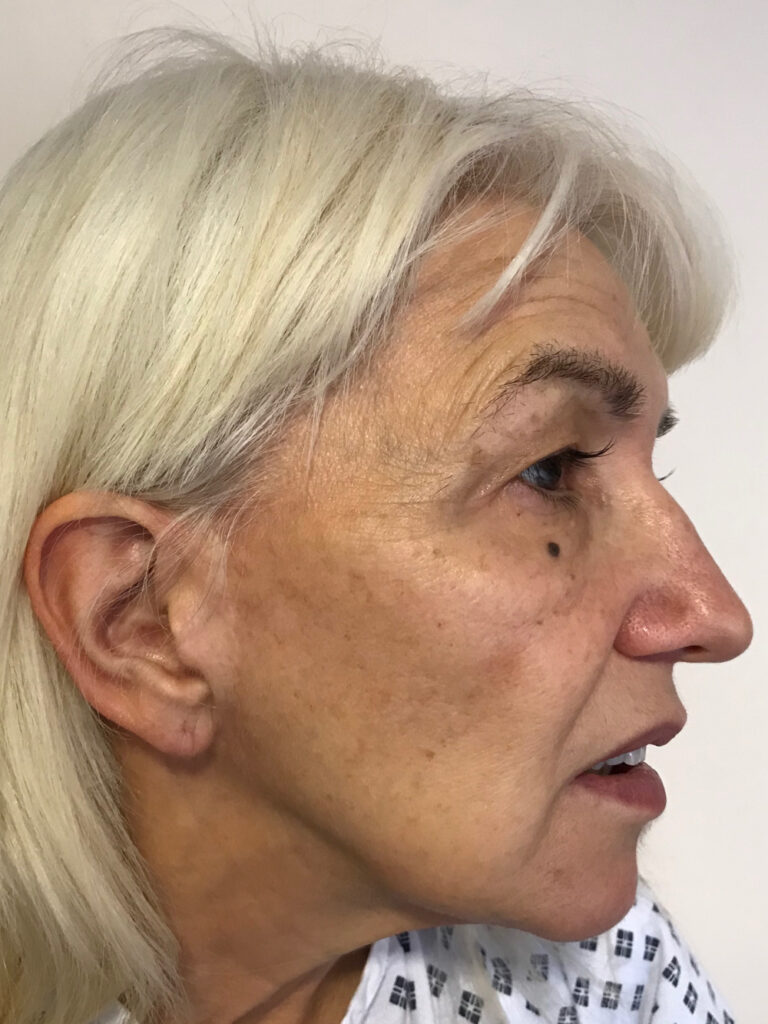 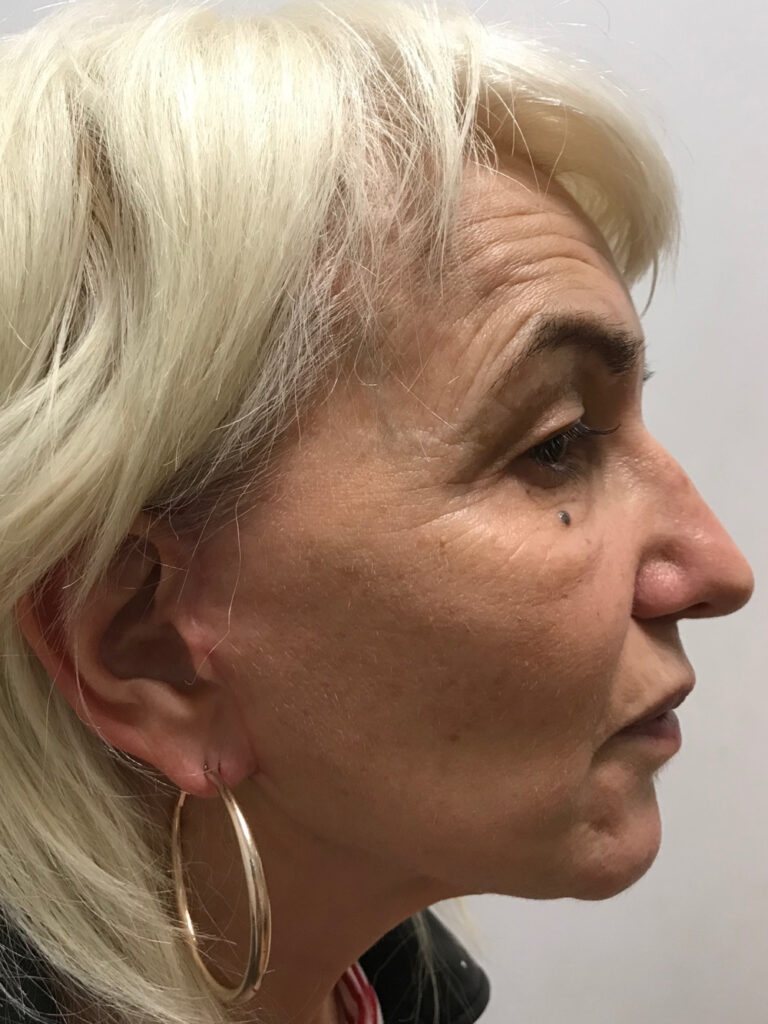 This is very much dependent on the technique of lift chosen. Patients undergoing thread lifts, 1 stitch facelifts or 2 stitch facelifts often have the procedure done under local anaesthetic only although sedation can be provided if preferred. These smaller procedures are done as day case procedures meaning you go home the same day.

A full facelift and/or neck lift is performed under a general anaesthetic or local anaesthetic and sedation. A facelift usually takes 2-4 hours depending on the technique used and the extent of the operation. You will be admitted on the day of your surgery and you usually need to stay in hospital for a day or two. A drain is usually inserted under the skin to drain any excess fluid beneath the skin flap. This will be removed prior to your discharge. After your operation, you will have dressings over the wounds and a head bandage will be applied. The bandage will be removed prior to your discharge and exchanged for a compression garment. The wound should be kept dry for at least 2 days. Following that, you may wash gently with mild soap and pat the wound dry. In the first week, you should take things easy and avoid too much physical activity. There will be bruising and swelling in the first week which usually settles by the end of the second week. Most patients recover fully after 2 weeks however strenuous exercise should be avoided for at least 6 weeks.

Following discharge, you will be seen between 5-7 days to check the wounds and remove any stitches. Further follow up will be at 6 weeks and 3 months to check the final result.

Scarring : The extent of the scar in a facelift is dependent on the facelift technique that is used. A full facelift results in a scar that begins within the hair above the ear and extends to the front of the ear, around the earlobe and into the hairline behind the ear. A short scar facelift results in a scar that is confined to the front of the ear. Scarring in facelifts tend to be red and raised to begin with however in the majority of patients the scar fades to an almost indistinguishable white line over time. This usually takes 6-12 months. In a small minority of patients, the scar may remain wide and lumpy.

Bleeding & haematoma : Although every effort is taken to control the bleeding during the operation, approximately 1% of patients will form a collection of blood beneath the skin flap from the facelift. If this occurs, you will need to return to theatre to have the clot washed out and the bleeding controlled

Wound breakdown : Rarely the stitched wound does not heal as expected and small areas of wound breakdown may occur. The risk of this is higher if a wound infection develops. This usually resolves by itself with dressings however may result in a wider scar and poorer scar quality

Wound infection : An uncommon complication that will require a course of antibiotics if it occurs

Skin loss : This is a rare complication that usually occurs if the skin is over resected and over tightened on the face resulting in a compromise to the blood supply and eventual wound breakdown

Altered sensation : There is usually some degree of altered sensation around the scar and skin after surgery however in the vast majority of cases, this resolves. The sensation to the ear can be affected if a nerve is cut during surgery, resulting in the ear feeling numb and tingly. If this occurs, it is usually permanent

Asymmetry : Every effort is taken to ensure that an equal lift is performed to both sides of the face, however there is a small risk of minor degrees of asymmetry to the face and ears

Facial nerve injury : The facial nerve lies beneath a layer of muscles on the face and controls facial movement and expression. It is very rarely injured during a facelift operation. In most cases, the nerves are merely stretched. If this occurs, there may be some weakness in the muscles of the face, particularly the corner of the mouth and eyebrows. This usually resolves with full return of function in 2-3 months. There have been reported cases of the nerve being cut however which result in permanent damage. This is a serious risk and should be considered carefully before you decide to proceed with surgery

General operation risks : Deep vein thrombosis and pulmonary embolism, the formation of clots in the legs or lungs are rare but can occur with any operation. These are potentially life threatening and so you will be given compression stockings to wear on your legs and blood thinning injections to reduce the risk of this