Breast augmentation, also commonly known as a boob job, is a surgical operation to increase the size of the breasts by placing an implant under the breast tissue. It is a breast plastic surgery technique to increase the size and fullness of the breasts either in patients who have always had small breasts or in those who have lost breast volume following pregnancy. It is also a useful procedure for breast asymmetry where patients who have different sized breasts would benefit from an operation to a single side.

GET
THE LOOK
YOU
WANT

All breast implants used in breast augmentation surgery consist of a silicone shell filled with either silicone (most used in the UK) or saline. Silicone filled implants tend to have a more natural feel to them and are usually chosen because of this. The silicone that fills modern implants come in the form of a thick gel known as cohesive gel.

This prevents it from movement and helps maintain its shape should the silicone shell surrounding it rupture. Implants also come in different shapes, sizes and profiles, and so it is important to choose the right implant for you.

This is probably the most important decision to make in breast augmentation surgery as it will ultimately determine the eventual augmented breast size. Implants come in a whole range of volumes from 80-800mls. Most patients already have a general idea of what size they would like to be, however it is also important to take into account the ideal size for your body habitus. As a rough rule of thumb, 100-125mls will increase your cup size by one.

In terms of choosing an implant shape, there are many options although the 2 commonest are round and anatomical. Breast augmentation with round implants are very popular and give excellent results with the majority of patients. Anatomical or tear drop shaped implants have less volume in the upper half compared to the lower half and are sometimes selected for patients with small breasts where the shape of the implant may be more apparent.

The profile of an implant denotes how proud the implant sits from its base and therefore how pert the breast is likely to be after insertion of the implant. The profile can be low, medium, high or extra high. This is usually determined during your breast augmentation consultation 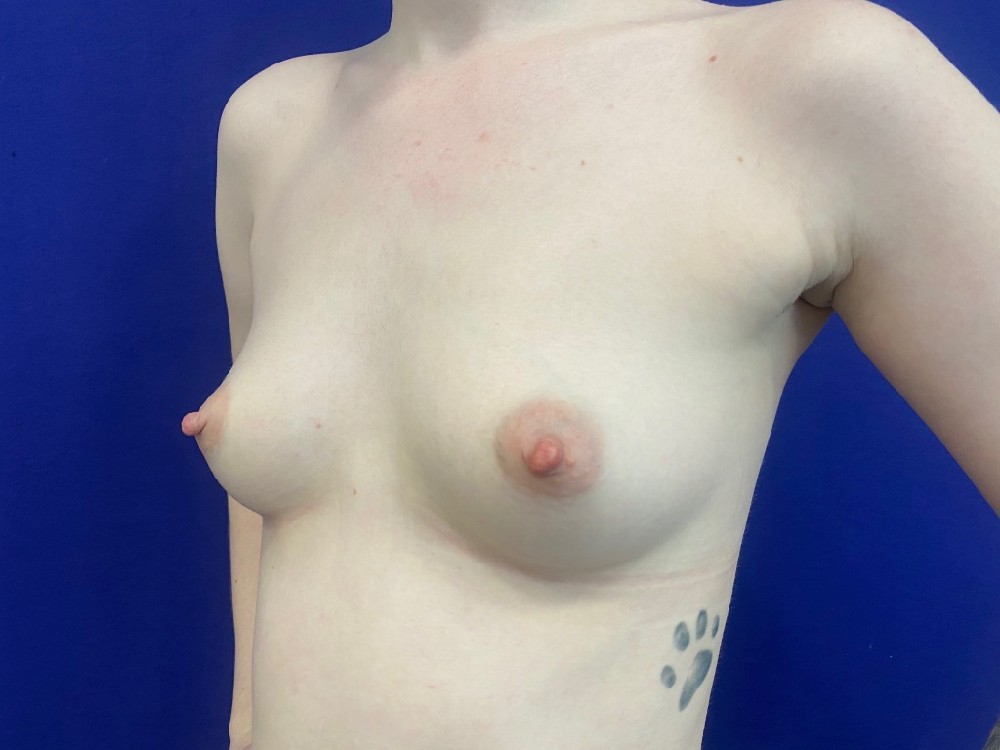 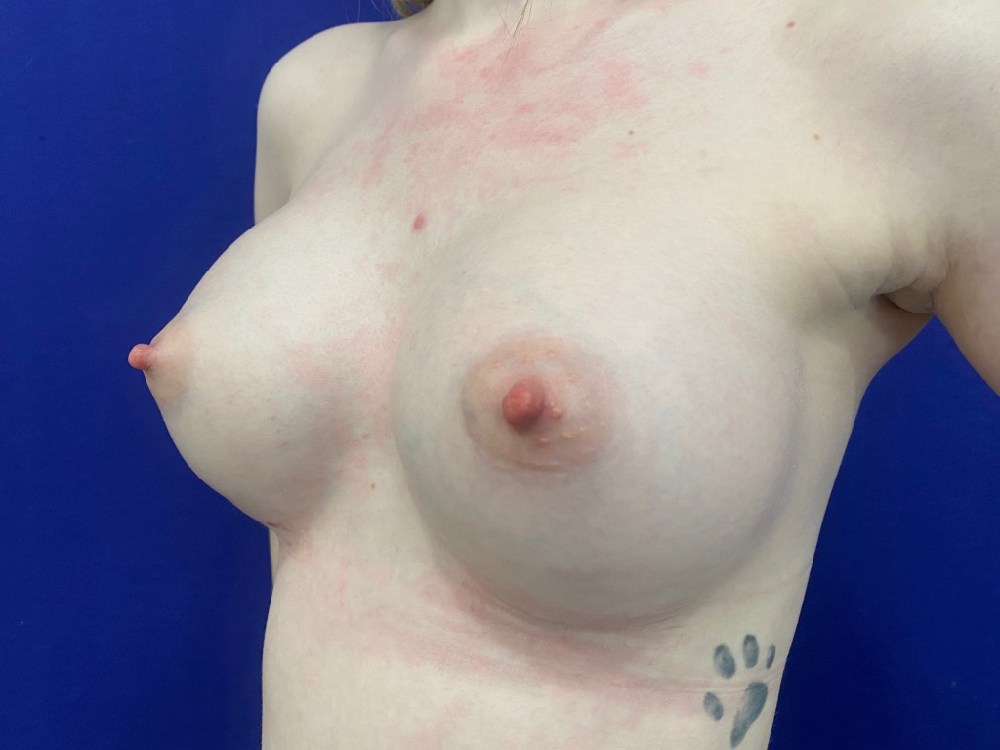 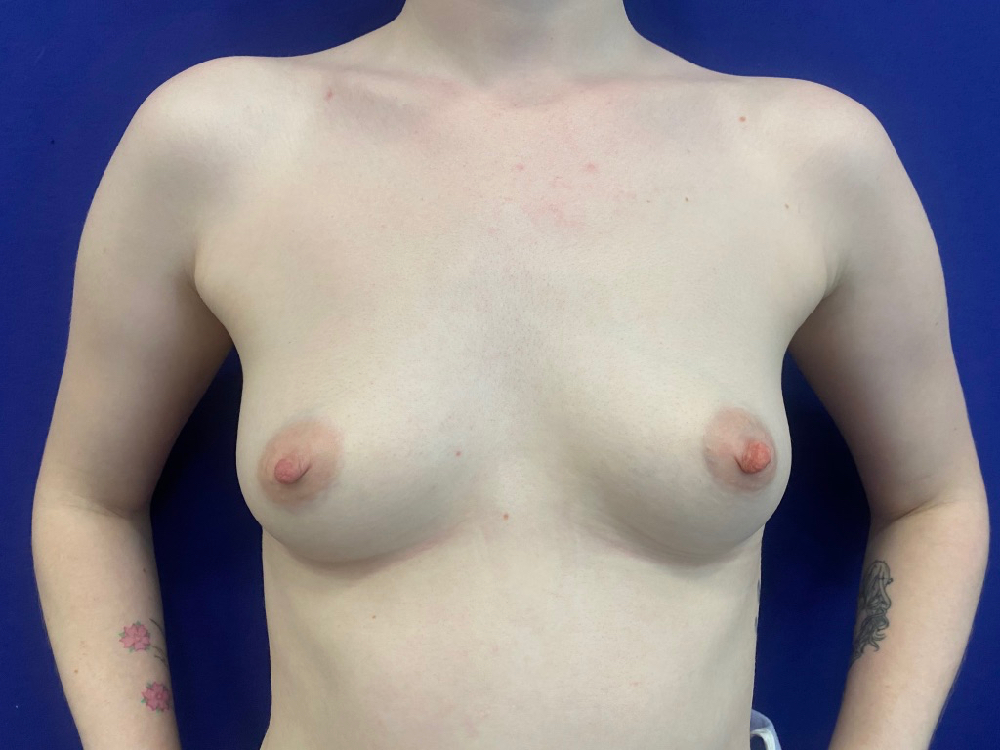 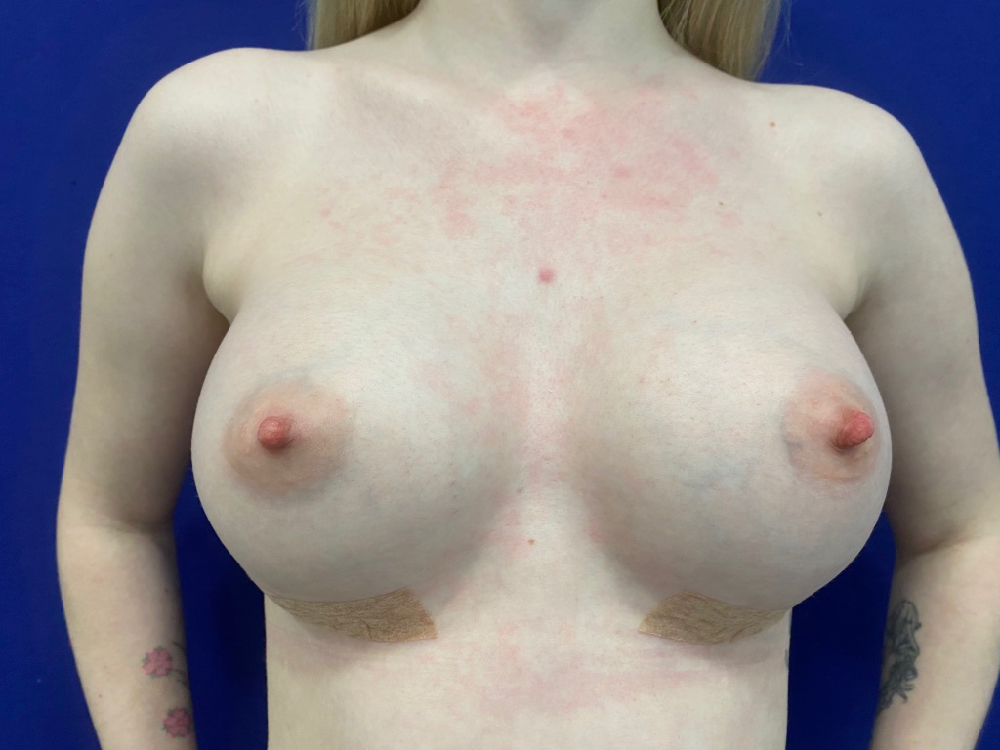 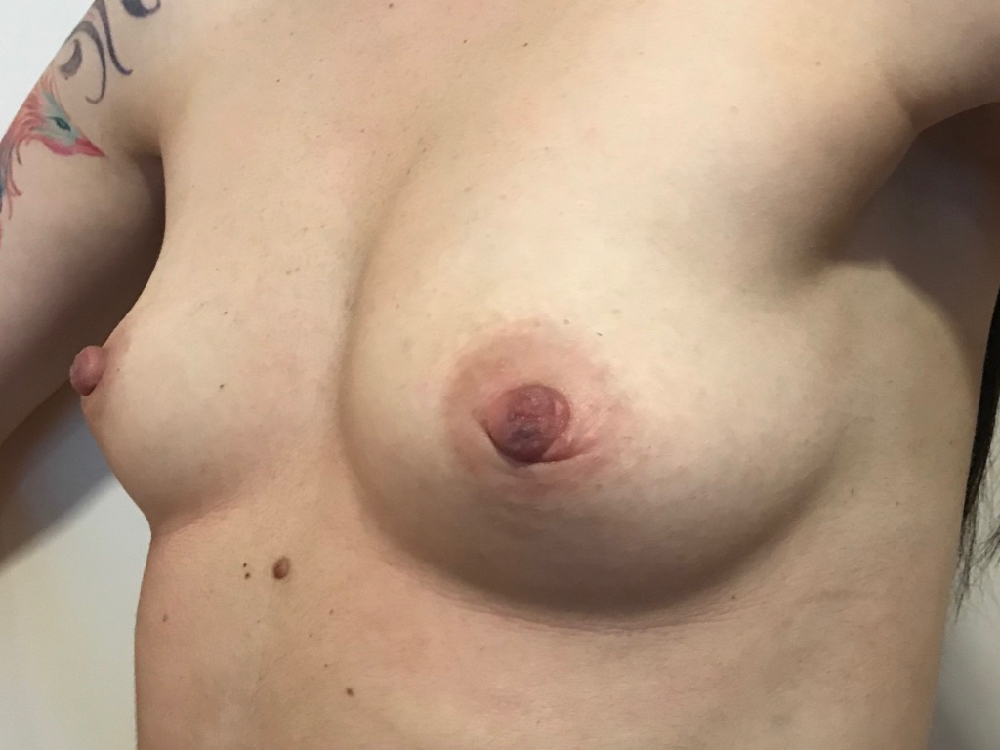 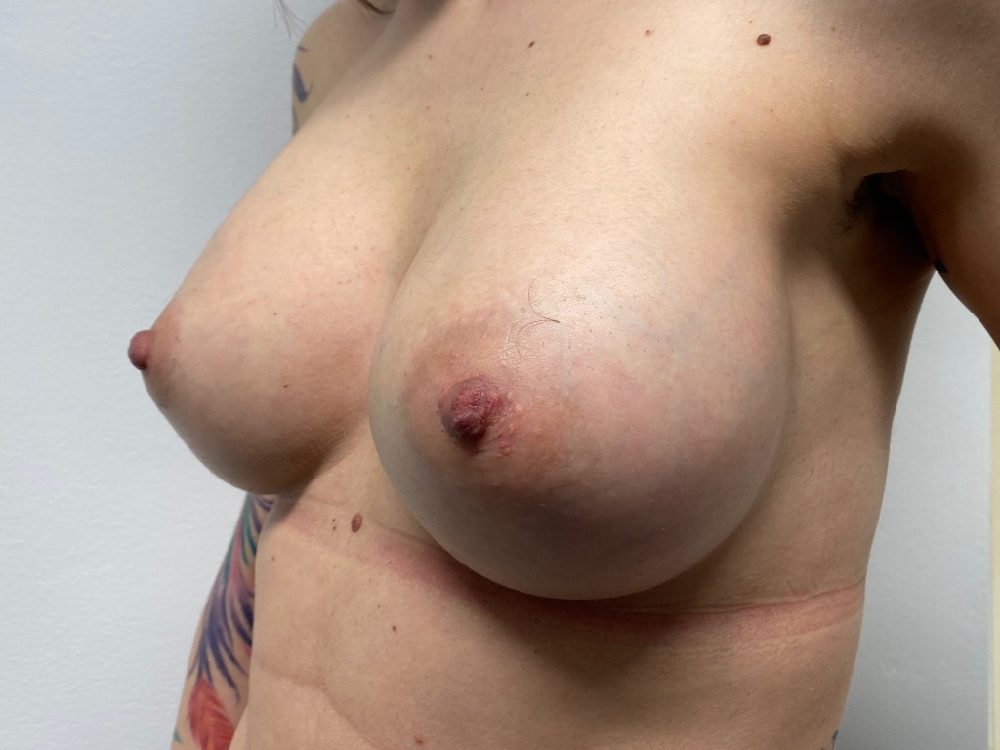 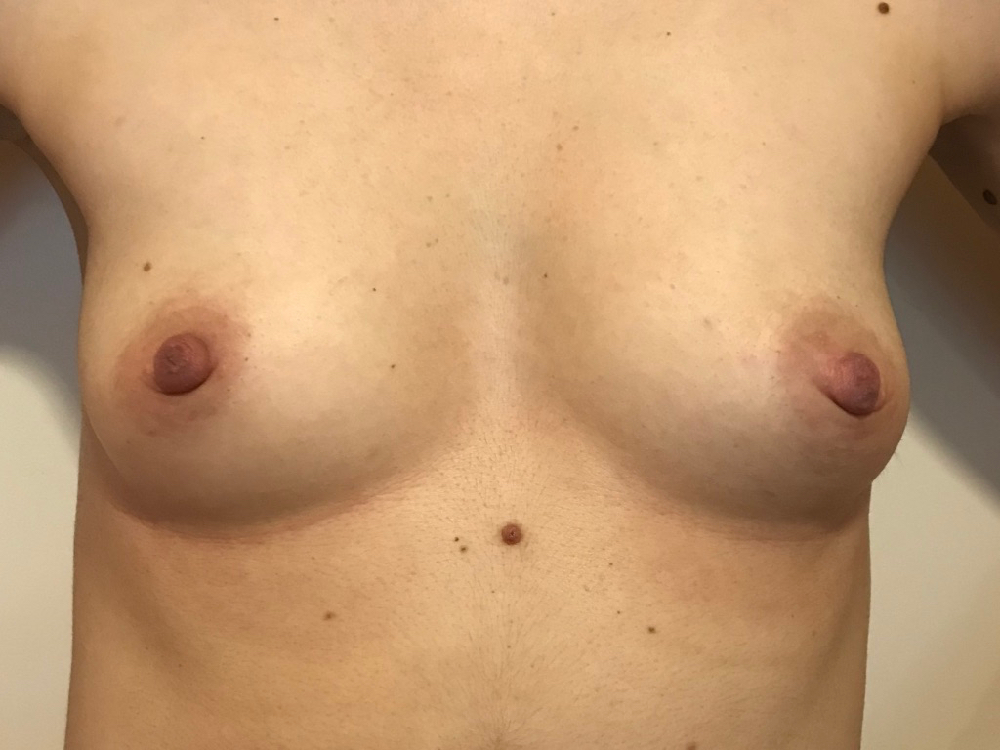 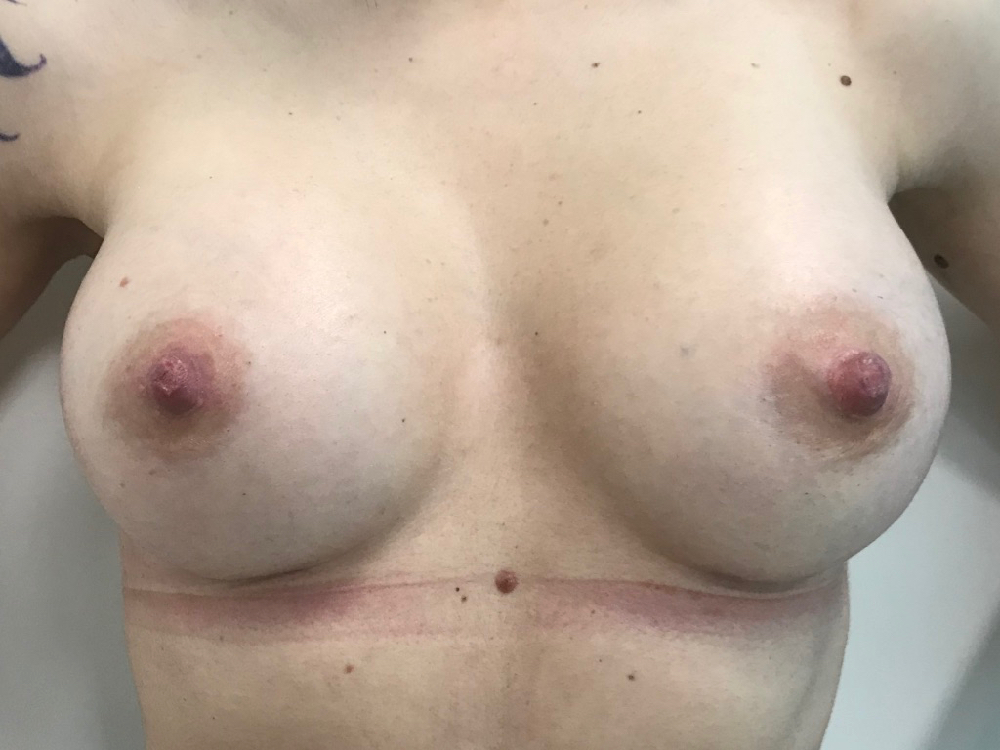 Breast augmentation can be performed under general anaesthetic or local anaesthetic and sedation. You will be admitted on the day of your surgery and occasionally may need to stay overnight. The duration of the surgery generally takes 1.00-1.30 hours depending on whether it is under the breast tissue or muscle. During the procedure, an incision is made on the underside of the breast, in the inframammary crease, and a pocket is dissected. The implant is then inserted and wound closed with dissolving sutures. The wound is then dressed with skin glue and a simple dressing. Occasionally a drain is inserted, usually when the implant is inserted submuscularly. If this is the case, then the drain is removed prior to your discharge. On the ward, you should wear a sports bra in your planned new cup size. This should be soft and supportive but not underwired. On discharge, you may shower as the dressings are shower resistant.

In the first week, you should take things easy and avoid too much physical activity. Most patients recover fully after 2 weeks however strenuous exercise should be avoided for at least 6 weeks. The appearance of your breasts will be a little firm initially however this softens and becomes more natural over a period of 4-6 weeks with the final appearance being apparent at 6 months.

Following a breast augmentation, you will be seen a week after your surgery to check that all is healing well and again at 6 weeks and 6 months to ensure to all is well and you are happy with the result.

Breast augmentation is a routine operation with the majority of patients achieving a good result. As with any operation however, it is important to understand the potential risks and complications that can occur.

RISKS & COMPLICATIONS ASSOCIATED WITH THE SURGERY

Scarring : There will be a scar on the underside of the breast which may initially be red and raised, however it will settle over a period of 6-12 months, eventually fading. In a small minority of patients, the scar may remain lumpy and red or become stretched

Bleeding/haematoma : Bleeding resulting in a haematoma within the implant pocket can occur in approximately 2% of patients. This is slightly higher in patients who have a submuscularly placed implant. If this occurs, you will require a further trip to theatre to have it washed out

Altered nipple sensation : The nipple sensation may be altered in some patients, becoming more or less sensitive. This is usually temporary however in a small percentage of patients(<5%) this may be permanent

Wound problems/infections : Wound problems such as wound breakdowns and infections are rare however when they do occur and are serious, the implant may need to be removed

Asymmetry : In patients with different sized breasts, a symmetrising augmentation can help match the size and shape however some asymmetry usually remains between the two breasts

RISKS & COMPLICATIONS ASSOCIATED WITH THE USE OF IMPLANTS

Rippling : Rippling is the appearance of the natural folds or buckles of the implant on the skin. It occurs more commonly in patients who have had a subglandular implant insertion

Capsular contracture : The inserted implant is inert however the body still recognises it as a foreign body and in 10% of patients over a period of 10 years, a scar capsule can form around the implant. This capsule can cause the implant to deform and in severe cases be painful. When this happens, the implant will usually need to be removed. To deal with the loss of volume, a new larger implant can be inserted to fill the space, or a breast lift (breast mastopexy) can be performed to reshape the remaining breast tissue provided there is sufficient volume. If the breast tissue is very droopy and lacking in volume, then an augmentation mastopexy may be required (combination of a mastopexy and insertion of an implant)

Breast implant associated Anaplastic large-cell lymphoma (BIA-ALCL) : BIA-ALCL is a rare type of blood cancer. In the last few years there have been reports of ALCL being linked to the use of silicone implants. The exact cause is not known however it is thought it could be due to particular implant surfaces. Cases of BIA-ALCL have occurred in women 2-28 years after breast implant insertion with an average of 8 years. The risk of developing BIA-ALCL is thought to be in the region of 1:20,000. Breast cancer in comparison has a risk of 1 in 8 in the United Kingdom. BIA-ALCL usually presents with a seroma (collection of fluid around the implant) and breast swelling several years of breast augmentation. It is investigated by sampling some of the collected fluid and either an ultrasound or MRI scan. The treatment of BIA-ALCL involves the removal of the breast implant and its surrounding capsule. If the disease is confined to the capsule then this is all the treatment that is required. Further information can be found on this factsheet.

Further information is available here in this Breast Augmentation guide